Dr Nawfal finished his training at the American University of Beirut Medical Center (AUBMC) in Obstetrics and Gynecology.
He then pursued further training in Minimally Invasive, advanced Laparoscopic and Robotic gynecologic surgery in the United States at Henry Ford Health System in Michigan, a pioneering institution in Minimally Invasive surgery.
Dr Nawfal is a certified expert robotic surgeon, and one of the first physicians with expertise in this new state-of-the art technology worldwide. He has been performing Robotic surgery since 2009, is a trainer for other surgeons on the robotic platform and has the busiest robotic gynecologic surgery practice in Lebanon.
He also specializes in advanced laparoscopic and single port laparoscopic surgeries, performing the most complex and advanced surgeries in a minimally invasive way, allowing for better results and quicker recovery for patients. He is the first gynecologist with an accredited fellowship training in robotic surgery in Lebanon and the region and his training is one of the few programs in the United States that is accredited by the American Association of Gynecologic Laparoscopists (AAGL).
In addition to being a member of the AAGL, he is also a member of the Society of Laparoendoscopic surgeons (SLS), the American Congress of Obstetricians and Gynecologists (ACOG) and is a Fellow of the American college of surgeons (FACS). He has published in prestigious journals, has presented in multiple international conferences and is a reviewer for the Journal of minimally invasive gynecology (JMIG).
Dr Nawfal has performed the first single port robotic surgery in Michigan-USA, the first single port laparoscopic hysterectomies (June 2012) and the first Robotic gynecologic surgeries (August 2012) in Lebanon and the region. He currently is the Chairman of the Reproductive surgery interest group and currently is the Secretary in the Executive Board of the Middle East Fertility society (MEFS) 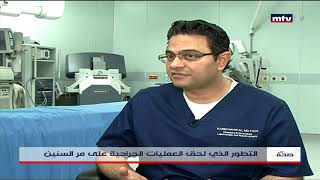